Finnegan, our new service dog trainee, has different virtues than Spice, our certified guide dog.  He’s a “designer dog” cross between a Goldendoodle and Standard Poodle.  Poodles are among the most intelligent of all breeds, and Goldens are affectionate and amiable.  Unlike Labs, he doesn’t shed, though he will need more grooming.  These dogs were first bred in the 1990s as an attempt to develop service dogs for people with allergies.  His soft, curly coat feels like petting a stuffed toy, and he looks like an Ewok in the face.  Finn is extremely alert to novel sounds, and turns his head to them immediately.  He does bark a bit, and he has a high-pitched whine.

For the first week we let him get used to our house and neighborhood, taking him on walks, practicing basic commands and managing interactions with our two cats.  Dixie, the alpha tabby, is less afraid of him than she was of Spice.  Despite her docility, Spice did look like a miniature body builder.  Strength is important when guiding for the blind.  If he makes it all the way, Finnegan will become one of the other kinds of service dogs, for hearing, health alerts, mobility or psychiatric assistance.  There’s a big demand for dogs to help with conditions including brain injuries, PTSD, autism, cerebral palsy, epilepsy and diabetes.  Unlike the guide dogs, they are taught to fetch desired items, and can be trained to help a person dress, and stabilize their balance. 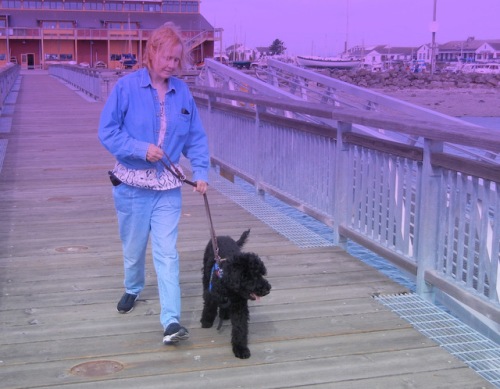 It’s a different training regimen.  There are no collar corrections, and clickers to “mark” desired behavior, followed by a treat are used.  There are no puppy clubs in this organization.  Raisers are encouraged to enroll in obedience classes with other breeds.  We’ve had a couple of individual training sessions with him at a local behavioral academy, followed by supervised play.  At the end of the month he will begin a six-week manners class.  He’s already well mannered, but could use work on controlling his enthusiasm about approaching others when he’s in his jacket.

Considering the number of new experiences we’ve introduced him to, the pup is progressing rapidly.  He’s only been to the water once, and the wave action frightened him.  We’ll work on it.  He’s visited a restaurant, a coffee bar and church, and behaved splendidly.  He lies on the floor in the back of the car so well he doesn’t need a tie-down.  He was unfazed being near the din of highway traffic, and passing by the noisy machines at the auto repair shop.

This is a small, quiet town, but we took the opportunity to expose him to the crowds of tourists who are here for our annual film festival.  This year’s special guest is Karen Allen.  Finn didn’t appear to know who she is.  That’s okay.  I’ll start home-schooling him on film history.  Yes, he’s that smart.