Coexisting With the Deer 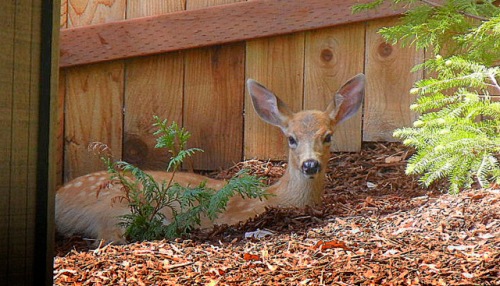 In my back yard

Welcome back to my little town, a pleasant port at the northeast tip of the Olympic Peninsula.  In winter our population contracts to around 9,000, but in summer we are 15,000.  The part-timers come to enjoy the natural beauty when the weather’s good, and to participate in our numerous and varied festivals.

Due to a confluence of beneficial factors, my little town is free of many problems larger communities face.  Our median age is 53.  The median in Seattle is 35.  Older folks tend to be law-abiding, settled.  Those who couldn’t overcome the problems of their youth have already died.  And people here know their neighbors.  We check in on each other.  That reduces crime.  If we have any gang members, they probably came to attend a concert.

The biggest topic of contentious debate at the moment, one that comes up every year, is “what must be done” about the black-tailed deer wandering through our town.  They are a tourist attraction, and even residents who don’t like them admit they are beautiful creatures.

The latest go-round on this subject began when a retiree and amateur gardener named Fran Post started an online petition demanding the city take action against these creatures she believes we must fear, and therefore control.  I think there is far less of a deer problem than a people problem, but I’ll allow Fran’s petition to present the argument in her own words.

Please, cull and manage the invasive deer herd in Port Townsend, Washington. Because they have no natural predators the deer population in the City of Port Townsend has become too large for the health of the herd and the health of the community. They have become invasive, with some displaying very aggressive behavior. Some of our residents are concerned about the possibility of injury, particularly to a child. The herd size needs to be managed.”

Her petition didn’t offer any specific evidence to back its claims, but articles in the local newspapers refer to an incident where a buck got through a fence and ate several thousand dollars worth of crocosmia at Far Reaches Farm.  Far Reaches Farm grows exotic plants for sale. Crocosmia comes from South Africa.  Hummingbirds like them.  Apparently, so do deer.

Let’s take a closer look at what else is in the petition.  “Cull”, when applied to animals, means selective slaughter.  The deer aren’t organized into a cohesive herd.  You can’t easily round them up for relocation.  The deer do not migrate by choice unless there’s nothing left to eat.  If you build a house, they will still frequent the property and eat the plants they like best outside.  That’s habitual behavior, not invasiveness.  You could sterilize them using contraceptive darts, but that’s expensive.  So in practice, the usual ways used to “manage” their numbers are by introducing predators (coyotes, wolves), or by shooting them.

The most ridiculous assertion is the one about aggressive behavior.  The only way you can get a doe to do something other than to avoid you is by getting between her and a young fawn.  That kind of behavior is defensive, not aggressive.  In those situations a doe may also try to stamp smaller pets like cats and dogs.  There have been a few incidents.  If you approach a buck directly during mating season they might fight, but that’s fighting back, not attacking.

I’ve seen deer a couple thousand times over the three years I’ve lived here.  Though some individuals are tame enough to eat in the presence of humans, their ordinary reaction is to exit calmly.  If I go out my door, they stop and stare.  If I remain, they leave.  I’ve never been able to take pictures except from inside the house, or in my car.  If I even get too near the windows, they get nervous and walk away.  The threat of injury to a child is a fantasy.  You would have to get between a doe and her fawn and retreat, leaving your baby on the ground.

Are there too many deer here for the health of the herd?  Nobody’s offered to pay for a deer census.  No one can say for sure how many there are.  Last winter was mild, so the numbers are up.  Back in 2010 the winter was harsher.  I saw very few fawns the following spring.  The newspaper articles offer anecdotes along the lines of, “A couple of years back one that looked sick came in my yard and died.”  The police logs don’t contain any records of attacks by deer upon humans.  There’s no evidence the deer consistently want anything except to get enough to eat, and find a bit of cover in which to raise their babies.  If they could achieve that and never have to see a human, they would.

There are risks to coexisting with deer, the chief one being an increased possibility of getting Lyme disease from the bite of a deer tick.  If you confine your close encounters to looking at them from inside buildings and vehicles, it’s highly unlikely.  You come in contact with deer ticks by hiking through deer habitat containing high grass – so I don’t.  The next biggest risk is hitting them with your car.  Fawns and dumber adults will dart right out in front of your vehicle, and you might not have time to avoid them if you are going too fast.  But people who live in my town drive slowly on purpose for this exact reason.  It happens, but not often.

Things didn’t end with Fran Post’s online petition.  Within days, two petitions urging protection of the local deer went up.  People who perceive the deer as vermin commented in support of Fran’s petition.  People who perceive the deer as I do commented in support of the other petitions.  The reaction of the city councilors was to do nothing, since neither side had suggested any method to pay for the cost of either killing or protecting the deer.  They have bigger problems to solve, and they’ve heard it all before.

It’s entertaining to read the impassioned comments for and against each side, and it helps sell a few papers.  There are links to the original sources at the end of this post, in case you enjoy drama.  Ultimately the solution is simple.  If you want to keep deer away from your plants, build a fence or greenhouse, and pay for it yourself!  We humans are the invasive ones, building homes in the habitat of wildlife.  If you choose to coexist you can do as we did.  The front yard is fenced, and we planted things out back and on the sides the deer like to eat.  There’s enough for us both. 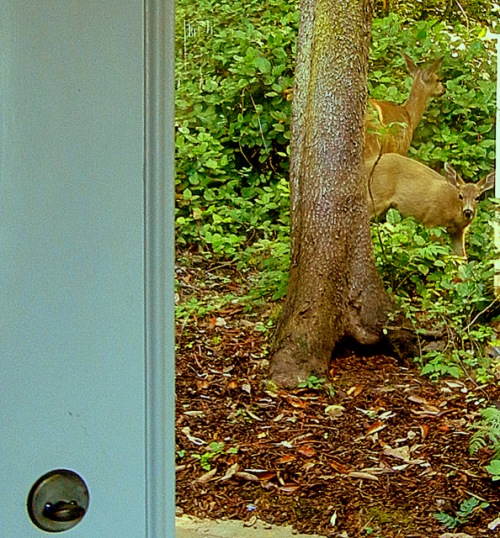 The original anti-deer petition with comments:

16 responses to “Coexisting With the Deer”