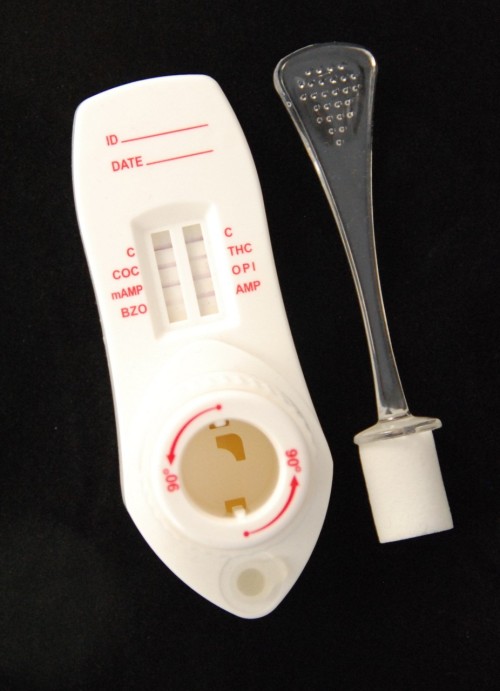 One of the clinical support jobs I perform when not taking x-rays is drug testing.  We have different kinds of kits, ones that test urine and ones that test saliva.  There’s also a portable “breathalyzer” to check for alcohol consumption.  Some local companies hire us to go to their location a few times each month to do random tests.  Others send employees to the clinic.  The employer specifies what drugs are to be tested for, and in what situations to test.  There’s different paperwork, depending on whether the test is for a DOT-related job (truck drivers, school bus drivers) or for folks with other responsibilities (railroad engineers, machine operators).  Testing is easy work, and the pay is high for the few hours it takes to do it.  People of the same gender as the applicants administer “observed” urine tests.

Men I have tested have tried every way possible to cheat.  None of the easy ways work.  I know about putting bleach or other substances on the palms to adulterate a urine sample, so we require observed hand washing prior to the test.  I do pat-downs and make you empty your pockets.  Fake urine that you buy at the smoke shop doesn’t foam or smell right, and the temperature is too low.  The lab always rejects it, stating “substance not consistent with human urine”.

Yes, if the company requires it, I have to stare close enough to see the urine come out of the tip to verify an “observed” test.  I did get fooled by a faux penis once, but not by the faux urine it emitted.  He wasn’t smart enough to use someone else’s real stuff.  I’m sorry if my looking makes it hard for some guys to go.  I can give them up to three hours, and a lot of water, to make it easier.  A refusal to continue equals a failed test.  I try to be gentle and respectful in manner, and to not take it personally if the applicant needs to gripe about the invasiveness of the procedure.  I tell them it’s not my favorite part of the job either, but that the employer sets the rules.

The only way I know of to beat an observed urine test is to go in after having self-administered a catheter full of someone else’s clean urine into your own fully depleted bladder, and re-emit it.  Trust me, it’s an uncomfortable procedure to perform on yourself.  Pulling your own teeth with pliers might feel better.  You might pass the test, but you’ll still get caught once you seek treatment for the bladder infection you’re very likely to cause, because you’ll get re-tested then.

I have plenty of sympathy for people who misuse recreational drugs.  They all impair a person’s ability to do demanding or dangerous jobs, but alcohol, for example, is legal for recreational use.  So is marijuana in my state.  Washington is going through the process of determining how to license, regulate and tax those who want to grow and sell it.  The same bureaucracy that controls alcohol is in charge.  It’s going to take about a year, and nobody knows what the prices will be yet.  Right now, police stop anyone whose driving is erratic and charge them with DUI, but if the driver has marijuana in view there’s no possession charge, because it’s legal to own.

Legalizing a small quantity of marijuana for personal recreational use happened in my state because enough people in government saw it as a potential revenue stream, and enough voters liked that idea.  We already had legalized the use of marijuana for medical purposes, something I endorse on compassionate grounds.  If a patient can ingest THC and get enough pain relief and appetite stimulus to be able to eat and stop vomiting when undergoing chemotherapy, or use marijuana to relieve the discomforts of glaucoma etc. I can’t see any reason not to allow it.  I’m on the fence about recreational use.  I have no idea if it will be as robust an income generator as predicted.  Maybe they’ll dedicate a percentage of the revenue to education or charities so they can say, “It’s for the kids.”

Because I was a teenager in the 1970s, I’m partly immune to non-scientific propaganda about the dangers of recreational drugs.  Back then smoking marijuana was such a normal part of going to college, no one even remarked about the smell wafting through the dorms.  Over the decades I’ve seen Americans accept, reject and re-accept different kinds of recreational drug use.  The cultural “pro” and “con” cycles don’t seem predictable to me, but that might be my lack of training in anthropology.  As archeology goes, making intoxicants is an old habit. Chemical tests of ancient pottery jars reveal that beer was produced about 7,000 years ago in what is today Iran, one of the first-known biological engineering tasks employing fermentation.  It’s not difficult to imagine cave people discovering the effect of psychedelic mushrooms.

Past legal and cultural objections to the recreational use of some drugs were originally based on the “gateway theory”.  It assumed that marijuana, for example, is a “gateway” to using more dangerous, addictive drugs like heroin or amphetamines, because a high percentage of addicts using so-called “hard” drugs were initially consumers of the “soft” drugs.  The theory ignores the fact that by far most users of these substances experiment with them a few times and quit.  Experimentation with alcohol and some other drugs in the teen years is an ordinary behavior that usually ceases after a few experiences of negative side effects.  However, a minority of experimenters become addicted physically and/or psychologically.

Family pathology and genetics are the real gateways to addiction.  Addicts run in families.  If you grow up around parents who self-medicate, then the child inside you believes that’s normal, and you’ll have to un-learn it as an adult.  If you start using, and have children, you will pass the message on to them.  Nothing begins or ends with us.  It’s easy to say people are probably better off not using substances to get high, but it’s unrealistic.  Every culture we know about features some kind of substance people use to get altered.

So, here are some ways to get high without the use of risky substances.  Wiser folks than I will recommend extended prayer, meditation, exercise, fasting or remaining silent for days.  All those methods work.  These are simpler:

1.)  Spin around, or have someone else spin you, until you are dizzy.  Don’t continue until you feel nauseous.  Every kid knows this method, and most have experimented with it.

2.)  Stay up too long.  You will automatically think differently, some of which can be highly entertaining.  Write out your thoughts during this activity, or record yourself.  You’ll be amused for a second time when reviewing your behavior.

3.)  Watch odd, comedic film clips.  This method never fails for me.  Here’s one I haven’t posted before:

4.)  Hold your breath until you can’t.  No fair using external equipment!

5.)  Practice “gurning” in the mirror.  If you have tolerant friends, you can practice at them too.

24 responses to “Getting High”