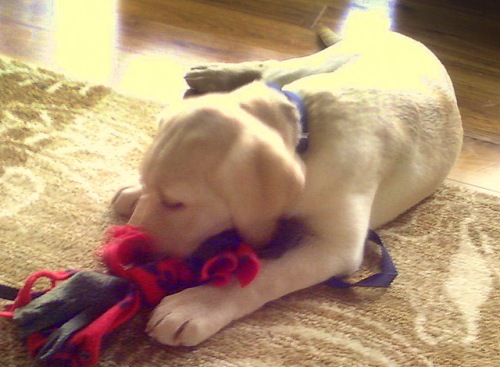 Look, I know you moms must go through this sort of thing.  I haven’t raised any children in the ordinary sense of the term.  I did take care of a number of adults who couldn’t voluntarily control their process of elimination.  When I did that, I became sensitized to smelling it outside their clothes, so I would know when they needed changing.  Those who produce the substances are sometimes oblivious to it.  I had not expected that to be true of our new puppy.

Maybe it’s that she’s enthusiastic and still a bit clumsy.  She’s barely 12 weeks old.  For the first time since we got her, Spice slept soundly for seven hours straight, at the end of which she had to go.  When we went out, she pooed, then peed, then pooed again.  When she produced product 2 for the second time, she was so happy about it she stepped in it with her back paw, then charged for the door to go back in.  I wouldn’t have gone in, but I only had one bag and I had already used it and threw it in the garbage, so I needed cleanup supplies.  As soon as we got inside, GAD, I could smell it.  At least I think I did.

Time out for explanation.  I’m unnaturally scared of the stuff.  I had a horrible encounter as a child including unanticipated stepping upon, slipping upon, maggots etc.  You don’t want to know.  Anyway, it’s part of why I went into health care.  I know how filthy the world is. GAAH! brrrr. (I’m trembling.)

So, we’re back inside.  Spice is happy as a clam, bouncing around, feeling good and Daddy’s still sleepy and trying to gather cleaning supplies while holding a leash.  The noise wakes up the missus and she begins asking questions about what happened.  Nobody can ask questions like a journalist.  And I sometimes express myself by saying what’s going on in this millisecond instead of answering the specific question she asks, which she calls “burying the lead”.  So I’m trying to explain, but I’m also frantic, and trying to concentrate on paw cleaning, and sniffing for clearance, and I can’t tell at this point if the phantom poo smell is real or a flashback from my experiences.  Mary and Spice have gone back to nap before sunrise.

Some people have their attention focused on the Republican primaries, or that other “elimination” story in Afghanistan.  Not me.