I’m staying out of the way today.  My wife has a cleaning crew in to prepare for the arrival of cousins this weekend.  If I stay home, I will be underfoot.  There are a number of projects in progress at Casa DeLuxe.  We had the grass mowed, a non-native shrub that was interfering with the septic aeration field removed, bought some plants to increase the ground cover in the wild (mostly) backyard, and had everything pruned that needed it.

We also had the flat area in back of the house cleared and laid flagstone.  The moles we chased away with stinky stuff last year came back over the last two days and dug up the flagstones.  Mary is angry at the moles.  I tried a bit of covert pleading on their behalf, but she’s not having any of it:

“Did you see what those mothers did last night?!  There are eight new holes between the stones!”

“We can go buy more of that stuff to chase them off.”

“Fuggeddaboutit!  I’m SO mad.  I’m going to have them killed.”

“We can go down to the hardware store.  They have a lot of different products that…”

“Are you listening to me?  Get your damn fingers over to Google and look up Pest Control.  NOW, mister!”

I know better than to continue considering the moral implications of mole murdering dispassionately.  Mrs. Invisible paid a couple grand to beautify the grounds for guests, only to have it disrupted by insensitive grub-diggers, so she’s in no mood for negotiation.  I chose to live with this woman for better or for worse, and I have to pick battles I can win.  Though I expect we have not made our last mistake, the moles probably have.

The other reason besides beatification for putting more stone behind the house has to do with Mary’s desire to have a dog.  She’s decided to become a puppy raiser for dogs that will be trained for various service professions.  It’s a good way to test her physical limits, to see if she can handle it, without the need for a commitment of years.  The puppy-raising phase of service training takes 14-16 months.  Then your dog goes into hard-core training to assist blind people, become a therapy dog, or go into police/military work, depending on the skills they exhibit as a pup.  I’m putting together a 12-foot kennel behind the back door to house the dog in good weather.

When I’m at home, I’ll be a puppy raiser too.  I still have four ½ years of work to go before I intend to retire, but with only on-call work I am home about half the time.  I stay up later than Mary and sleep less, so I’ll be available for the early repetitious reinforcement exercises that are important during the first few months.  We’ve been meeting with other trainers and learning to handle different dogs ranging from 10 weeks to a year old.  By mid-October we will be ready to accept a puppy of our own to train.  Assuming it works out, after 14-16 months, that dog will be exchanged for another puppy.  There’s a big demand both for these dogs and for puppy raisers. 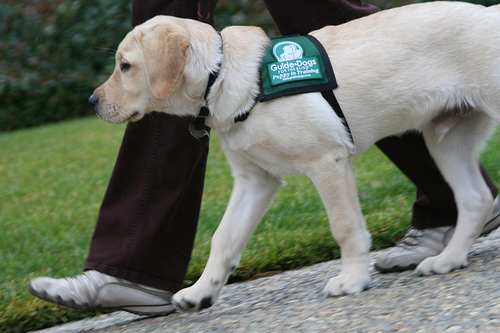 You can get dogs to do a lot if you begin training young enough, and they like learning the routines and commands.  They learn a consistent boundary by being on the same leash at all times outside.  We reinforce proper behaviors with single pieces of kibble.  Within a few months, dogs learn to walk near the handler’s left side at the speed the person chooses without straining the leash.  They sit, lie down, wait at doors before entering and will hop into a carrying crate on command.  They also learn to pee and poo ON COMMAND, which is pretty amazing since I can’t even do that myself.  You tell the dog “Do your business.”  You lead them around in a circle at the length of the leash.  They will circle around, stop and squat, and either do #1, #2 or both, after which you praise them lavishly.  This ability is essential if the dog is going to become a blind person’s companion.  The blind person will be able to clean up after their dog.

These dogs learn to be more bonded to humans than to other animals.  Lots of gentle handling in the early months and reinforcement with kibble will teach them to passively accept being inspected all over, having their nails clipped and teeth cleaned, and washings or wound care.  The 40% of dogs that complete training trust their handlers completely.  The individuals most suited for this kind of service have a strong desire to conform to whatever behaviors will earn them rewards in the form of food and praise.  There’s nothing they want more than to play the game well.  You can see it in the eyes of the smart ones.  They look at you with an excited expression that asks “Did I do it right?”

Service dogs learn not to bark when in the crate (where they learn they will always be safe), or to independently approach other animals and people in proximity.  They are taught not to bite or “mouth” anything that isn’t given to them as their own toy.  They must not beg for food, jump up on people, or disturb items on a table.  They are not allowed on beds or other furniture.  Golden retrievers, Labradors, and mixes between those two are the most common dogs trained.  Those breeds tend to have the best personalities and skill-sets for the job, though exceptional individuals of other breeds like German Shepherds are sometimes trained.  More kinds including smaller breeds can be raised as therapy dogs for nursing homes and rehabilitation facilities.

A few days ago we had a 10 month-old Golden named Vivian over to the house for a few hours, to see how the cats would react.  Because Viv sat still and just looked at them, they weren’t disturbed.  Maybe we can all learn to live together, given the proper training.