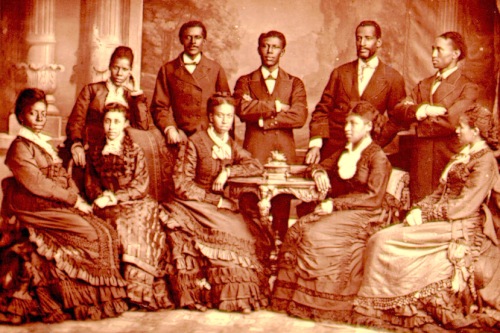 The Fisk Jubilee Singers in 1877

The musical song form known as spirituals began as a beautiful union between American slaves’ desire for freedom, their identification with Old Testament stories, and a post Civil War embrace of European choral harmonization in Black colleges like Fisk University. Gorgeous melodies were married to coded messages about escape from imprisonment.  Now that the American slaves have all gone to their reward, spirituals have come to represent people’s desire to be freed from all kinds of bondage.

I was fortunate enough to be on tour with a fine performance choir a few years after the Berlin Wall fell.  Along with classical pieces, we sang spirituals in what had been East Germany, and in the Czech Republic.  Many of the classical pieces had come from their region, but it was the spirituals that brought them to tears.  These people had lived in bondage for decades.  They understood the power of these songs better than we who were singing them.

A number of spirituals use water metaphors.  The river Jordan is the place where you get baptized into new life, but it’s also where you go to put tracking dogs off the scent.  You follow the drinking gourd to the Underground Railroad, to the North, to freedom.  The promised land lies beyond the water.

It’s better to die attempting to gain freedom than to live enslaved.  Many spirituals underline this truth.  This past Sunday I sang one with my church choir that uses the water and the afterlife as freedom symbols.  Most of those in my church choir are seniors.  They are closer to the natural transition into the next form of life than I am.  The members of the church we attend are also primarily seniors, like the town (Sequim) where it’s located.  Imagine how the soaring melody and lyrics connected with these singers and listeners:

“Deep river – My home is over Jordan.

Deep river, Lord.  I want to cross over into campground.

Oh, don’t you want to go to that Gospel Feast?

That Promised Land, where all is peace.”

While much of America focuses on growth management, I’m learning to manage my  decline.  In this country we’ve been historically good at entrepreneurial activity and innovation, but not so good at managing or even facing decline.  When things are going upward and forward, we are good at riding that wave.  When things are bad or risky, we pretend it isn’t really happening or bicker about who started it.  Most people don’t save for that inevitable rainy day.  There are some though whose entire lives are consumed by aversion to risk and the pursuit of safety, which is as much an illusion as the assumption that what goes up will never come down.  I’m determined to find an honest acceptance of the entire cyclical nature of life.  It goes up and it goes down, and whatever is begun flows outward, but also comes back.

A couple of months ago I had to take a hard look at risk versus benefit in my work life.  In the same month, both my part-time employers asked for me to take on more hours.  I had to make a choice.  As a caregiver in a specialized dementia care facility, I was helping people in dire need live as well as they could while their brain-circuitry browns out, then helping them die as comfortably as possible.  It was poorly paid and risky work for a person of my age.  I did not mind about the pay because there were so many other interpersonal compensations.  However, two-thirds of the caregivers sustain injury at some point because it involves heavy lifting dozens of times every day.  The young ones shake off the sprains with a couple weeks of pain meds and physical therapy.  The ones my age get lumbar and cervical disk ruptures that never get better, and sometimes their injuries require knee or hip replacements.

Because I knew it was physically demanding, I took care to always perform lifts using perfect body mechanics, or ask for assistance from others if I needed it.  However, when you are over 50 it only takes one slip, one twist to cause permanent injury.  My wife fell once, only the length of her own body.  Three of her neck vertebrae had to be fused, it ended her 30-year career, and two years later she still requires daily pain meds and can’t drive an hour without stopping for rest.  Over the months this dichotomy became clearer to me from what I saw in my other job as an X-Ray tech at the Urgent Care.  The young fall from rooftops and end up bruised.  The old trip on the sidewalk and need surgery.  It was presumptuous of me to think I could tempt fate indefinitely.  I resigned from care giving.

At first I felt guilty, as if I was abandoning my own children.  But I also have a life outside of work, with responsibilities.  My wife can’t lift anything more than a few pounds.  My mother, who is in her eighties, needs my help.  My niece and new grandniece, whose picture you saw last year, are moving to this area.  My son’s second ex-wife is generously doing what she can to keep my son and second grandson in contact with me – an extraordinary gift I never expected.  I have a chance to help close a circle that was ruptured with my parents divorce 40 years ago.  I am also beginning work on some longer form writings.  I need more time.

In the nine months I worked at the dementia care facility, I helped two dozen who died there.  Some died with their hands in mine.  I wouldn’t have missed it for anything.  But nearly every resident I met my first day has now crossed over into campground.  It’s time to begin preparing for my own journey, which is likely within the next couple of decades.  I want to leave behind some written work of greater significance.  I’m glad you are here to witness and participate in my learning process as I share it in this space.  We are all traveling on the same deep river.