One of the most notable of human qualities is our ability to adapt technology to solve problems.  Another would be our inability to stop “solving” the same problem over and over again to the point of over-solving problems to degrees they don’t exist.  If it aint broke, we MUST fix it. It’s a kind of excessive-compulsive disorder.

It goes back to our being animals.  We are clever problem solvers, but we are also acting from bio-imperatives written into our genes.  We do all sorts of animal things like compete for territory, food and sexual partners.  Any rational person understands that war is an evil thing.  We have war because we are programmed aggressors and defenders, and because we cannot resist trying out our new inventions, even when it’s better technology to be used for killing.

Take automobiles, for example.  They are part of a never-ending solution trend that began with the need and/or desire to be able to go to places far away.  Walking took too long, so we began riding horses.  Then, to be able to haul more stuff back from far away, that expanded into wagons and stagecoaches.  Trains and boats allowed for more efficient hauling of huge amounts of stuff and you could move more people back and forth also.  However, people are selfish by nature and demand the ability to tailor their travel itineraries flexibly and individually.  Therefore, we made automobiles.

Cars go faster than we really need to go.  They are also much larger than 9 out of 10 people need.  They burn fossil fuels in finite supply and produce air pollution that reduces lifespan and is expensive to clean up.  Some say the pollution has changed the climate of the planet.  I’m not taking sides on that one.  I will say that driving a steel vehicle that weighs 10+ times more than me, burns the irreplaceable product of plants and animals that died a million years ago, and that goes so fast that if I blow a tire it can roll and kill me in 8/10 second sounds insane.  I can’t afford a horse or a vehicle that uses cleaner fuel and goes slower, and I need to get to work within 15 minutes of being called.  I’m putting my life at risk because I have no better solution.

Agriculture began as a solution for how to feed the tribe in winter when game was scarce.  People figured out how to plant and grow more food than the tribe could eat.  Food surpluses became trade goods.  That spurred demand for ways to preserve food so it could travel.  Adding salt preserved food and allowed older food to remain tasty.  Now so much sodium is added to so many foods in the “developed” countries that we have big increases in high blood pressure, which decreases lifespan and increases the cost of medical care to treat it. 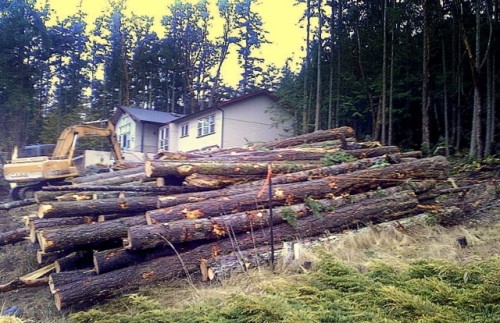 If you can build weatherproof domiciles, you can live in colder climates that have great natural beauty – like here in the Pacific Northwest.  However, if you insist on building McMansions you’ll have to remove a lot of that natural beauty to make room for them.  There’s a house going up next door.  It will be about the size of a medieval inn, and only two people will be living in it.  Another one of similar size will soon appear down the hill in front of us, also to be occupied by a couple.

I completely understand wanting to build a home in this lovely place.  I’ve met both couples, and they appear to be basically decent people.  I know how to make friends with people who don’t vote the way I do, and I had better know how to co-exist with people who don’t think like me – because hardly anyone does.  I’m going to be a good neighbor and try to offer our own model of voluntary simplicity.  I have to be rich in grace and generous in spirit, and not judge people harshly who are more materialistic than I am.  People do not change easily.  The things I understand now in my 50s took most of my life to learn.  But I must have a little time to grieve for the loss of the trees.  I hope the deer will still come around. 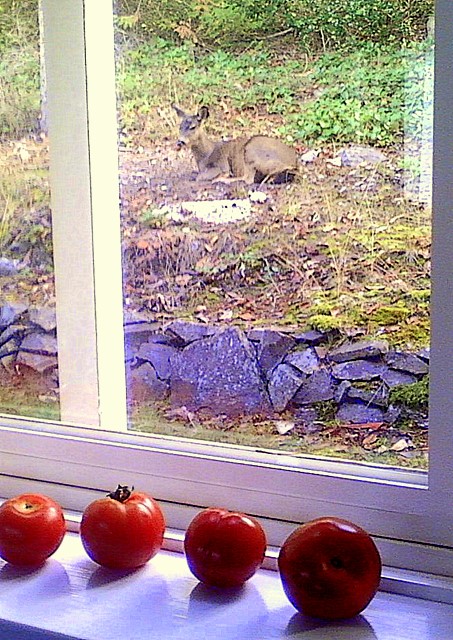 Filed under Emotions, Ethics and Morality, photos, Thinking about thinking