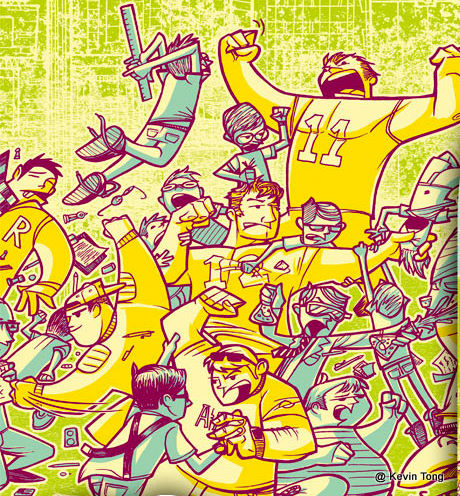 Some humans like competition.  I’m a mutant.  I have no sports gene whatsoever.  If I’m forced into a competitive situation and I win, I feel bad about it.  I have nothing against health or even strength per se; I just don’t remember ever having had much interest in achieving them by beating someone at a game involving athletics.  This may have been an adaptation response as I was growing up.  I was nearsighted, had many allergies and asthma, and I was skinny and short.  I wore thick, plastic glasses and I could not sustain prolonged physical activity without wheezing.  I’m so much more fit and average-looking now you might never guess how white and nerdy I was as a kid.

In public high school at that time, “physical education” classes were required.  This meant that no matter what your disability was, if you were enrolled you had to show up for gym class.  There was an invisible ghetto for students like me and others who didn’t fit any of the standard ability categories.  I shared this space with a fat kid, a foreign kid, a hippie kid (“Freak 1”) and one with a growth-limiting condition (“Freak 2”).  It’s not that we were the last to be chosen for teams.  Nobody chose us at all.  We had to be our own team.  This meant we also had to offer ourselves to be happily slaughtered by the “normal” teams.  We were bulldozed in football.  We were run over in track.  After a couple of months, I’d had enough of this nonsense.  I decided to change the game.

Basketball season was approaching.  My companions were keen to try anything that might alter the standard ritual of competitive humiliation.  I proposed that if we could psychologically endorse our lack of ability as a virtue, it would protect us from shame.  Better yet, if we performed in an unexpected fashion, but still within the rules we could alter the nature of the game itself and affect the opposing participants.  I’m being too vague.  We decided to lose ON PURPOSE, and help the other teams beat us.  That way it would be an outcome determined by OUR choice, and it would confuse the hell out of the jocks who had taken such pleasure in creaming us previously.

This group decision gave us an immediate esprit d’corps.  We called ourselves The Flunkees.  Each of us drew a capitol “F” in a circle on our tee shirts.  When the gym teacher asked what it was about, we lied and said it meant we were “friends”.  We got together between classes to plan our strategy.  We even met after school in a music practice room.  Gym had never been something to look forward to.  We were motivated.

It was the day of the first basketball game.  The Flunkees were up against another five-man team, all of them members of the school’s actual varsity teams.  These were true believers.  They thought the way combatants thought in the Middle Ages.  Might makes right, and God strengthens the arms of the virtuous to ensure victory.  We ran in line onto the court.  Our unexpected enthusiasm made the big boys laugh.  They didn’t know we were about to explode their world-view.

The Flunkees won the tip, because the jocks were still laughing.  With a look of fierce determination, Freak 2 passed to me.  I dribbled, turned and passed to Fats down toward the wrong basket. Fats passed to Foreign, who was right at the opposing team’s basket.  The ball swished in.  The Flunkees cheered.  Two points – for THEM.  The jocks still thought we had mistakenly put it in the wrong basket so they continued to laugh.

Freak 1 got the ball and began walking with it under his arm.  The other four of us pointed at him and shouted, “Travelin’ man!” whereupon he tossed back his long hair and began “trucking” toward the opposition basket.  He trucked up to the tallest of the jocks, and handed him the ball.  The big guy was dumbfounded.  The captain of the jocks team went to talk with the gym teacher.  We had prepared for this.  We had the rule book ready.

The other team attempted to object once they realized we were not only letting them win, but making sure they won.  The problem was that nothing in the rules says you must try to win.  It only tells you how the game is played.  It is assumed you will try to win.  There’s no rule against losing intentionally, unless you do it for the purpose of profit by wagering.  There was no money on this game.  We were betting with our self-esteem.

The jocks shrugged their shoulders and tried to continue as best they could, but we knew their hearts weren’t in it.  It’s not much fun to beat a team that wants you to do it.  We tried to encourage them as best we could.  We used the cheer we had practiced.

In the last few minutes we concentrated on running up the score.  Having pointed out to the other team that the school still kept class statistics on high point totals, we finally gave them something to work toward.  We assisted in running up their score as rapidly as possible.  In the last few seconds, one extraordinary thing happened.  The captain of the opposing team, the biggest true-believer jock of them all, ran the ball to the end of the court and put one in our basket.